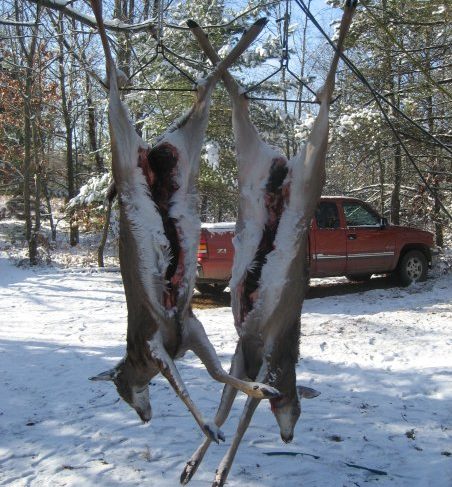 What smells better than bacon and coffee?  Don’t rush me; I’m thinking!
Taking a slow deep breath can do a lot more than just fill your lungs with oxygen.
It can also fill your mind with memories of simple things like smelling your mom’s cookies baking.  The other morning, I threw a half pound of thick applewood smoked bacon in a big cast iron skillet and started a pot of coffee.  I was immediately transported back in time to a few dozen deer camps.  If you want to wake up a bunch of hunters, throw away the alarm clock and start some coffee and bacon. Its amazing to me the way a smell can trigger a rush of emotion. As I was writing this, I recalled one particular morning.  There were six of us in our tiny cabin.  We all bundled up at the same time and headed out into the darkness. I sat motionless in my ground blind waiting for first light.  Just as I was able to see the features of the terrain, I reached for my binoculars to glass around for a bit.

Off in the distance, I could see my son Nick’s tree stand.  It was easy to see because it was much higher than I was comfortable with.  He set up in a huge oak tree at the top of a hill with a very deep ravine. I was nervous about his distance from the ground, but he did have a very reliable body harness. As it got brighter I could see his stand, but no Nick.  Fearing the worst, I hailed him on the radio.  No response.  I called our other hunters to see if Nick was with them.  No one had seen him since we left together.  I went back to the cabin to see if he had gone back to…..well, you know.  No sign of him.  I called everyone together, and we started to search for him.  We called his name aloud and searched every available blind and tree stand in case he had decided to try another spot.  No Nick anywhere.  We decided to head back to the cabin in case he’d returned.  He returned alright.  He had gone back to the cabin and crawled all the way into the bottom of his bag right after we’d left together at 5:00 am. He was sleeping soundly, and I didn’t see him when I’d returned earlier. Rolled up in a ball at the foot of his bed made the bunk look empty.

I was prepared for this transgression.  I reached into the closet and grabbed one of those deafening canned air horns.  All it took was one very loud blast!  Think back to the old Warner Brother’s cartoons when Foghorn Leghorn would torment the sleeping dog.
If I remember correctly, I think he bounced upward into the bunk above him and nearly knocked himself silly.  That’s just one of the many deer camp stories that deserve repeating annually.  What was I talking about?  Oh yes, aromas.  Also, high on my list is wood smoke.
I know it may seem odd to some but its very primal to me and makes me feel good.  Who doesn’t love the smell of bread baking?  I also love the smell that pine trees release when the sun bakes down on the needles. The old saying and popular song “Stop and Smell The Roses” couldn’t be more factual.  Daily, I appreciate the gift of smell because it gives me so much and it doesn’t cost a thing.